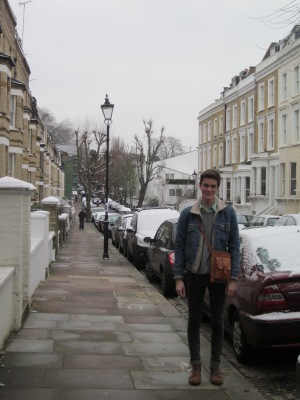 Normally, winter break at UCLA is a very comfortable three weeks long. Last year, we got a fourth week on account of the new year falling on a Sunday, and the extra time nearly killed me because of the additional gluttony and TV watching. The French school system is set up to give you just a little two week break, which terrified me at the beginning of the semester, but through some freak accident (that I plan on recreating this semester) I took only courses with in-class finals, which all took place in December instead of the middle of January. My break got stretched from a high school-sized two-weeker to a demi-summer break of five weeks. I cannot remember a winter where I have had so much free mental space to think about things besides school and schoolwork and what outfit to wear tomorrow at school.

My break started with a visit from my dear friend Carly who braved two trans-Atlantic plane flights in less than a week and a half just to see me. We spent a few days in Lyon to catch me up on everything happening at UCLA and to let Carly get jealous of my beautiful city. We then sped off to Paris for a whirlwind adventure that included cups and cups of extremely rich hot cocoa, many walks, lots of ice cream, and several visits to Shakespeare and Company (Paris’s English bookshop). Seeing Carly was magical, partly because any amount of time spent in Paris is magic and mostly because Carly is magic. It was like being back at UCLA (and it felt good).

After sending Carly off to the airport, I headed to the Alps for a week of skiing and mountaineer food (think wild deer, boiled chestnuts, lots of melted cheese). If I wasn’t on the slopes getting severely wind-chapped, then I was spending my time reading a book or watching the Alien movies (of which there are four – I started seeing Sigourney Weaver on the ski lifts by the time I was done). The best part of the Alps was having my very first white Christmas, so so picturesque.

I then shot back over to Paris for New Year’s with my friend Sasha. Paris again involved more hot cocoa and more food and a sparkly Eiffel tower to welcome 2013.

To finish up, my friend Gina, who is spending the year studying in Egypt, came for a visit. We went over to London for a week to stay with friends and soak up some English-speaking culture. We got to go look at the Crown Jewels, bounce in and out of pubs, take a tour of Westminster Abbey, see Windsor Castle, and just generally enjoy each others’ company.

I feel completely spoiled by this break, not only because it was so so long or that I got to travel so much but because I got to spend time with some of my best UCLA buddies. But ahhh, now to return to school. I’ll be posting something soon about classes!