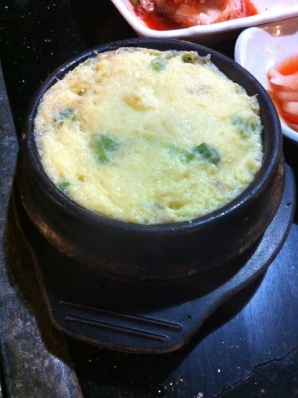 One of the things I like about attending UCLA is that I get to go to Korea Town whenever I want to. Not just because I’m Korean, but because of all the delicious food and the authentic culture found in that place. When I first visited K.Town, I had forgotten that I was in America for a while. Unlike where I’m from, Norcal, there were Korean signs in every corner; for restaurants, cafes, churches, real estates, grocery markets, etc. People were speaking Korean in the streets, hair salons, and everywhere I went. I felt like I was in Korea! I hadn’t realized until then how much I had missed the Korean culture, having never had visited Korea after moving to the states.

But now, I am so close to Korea Town and I can go there whenever to eat, shop, or just hang out. So last weekend, I went there for some all-you-can-eat Korean bbq with some friends from my dorm. It was an exciting experience for me because I had never gone to an all-you-can-eat restaurant. We went to a restaurant called “O-Dae-San” (named after 1,563-meter-high mountain in Korea fyi!). With an affordable price of just about ten dollars, we were constantly fed with endless number of plates containing all sorts of Korean BBQ that we can freshly grill in our seats. One of my favorites was the Korean beef brisket wrapped in a rice paper with a piece of grilled kimchi and some pickled radishes. Along with that, we were served with steamed eggs in a hot pot, bean paste soup, salad, hot tea, and countless side dishes that are typical in any Korean restaurants. It was simply heavenly. Why hadn’t I tried this before? Why hadn’t I come to LA earlier??

After having my very first all-you-can-eat KBBQ, my friends and I decided to go onto second round to get some dessert at a place called “Heyri.” Even though it was pretty chilly out, we ordered Korean shaved ice, or “potbingsoo,” that consisted of red bean, all kinds of fruit, and a scoop of ice cream on top.

I thoroughly enjoyed every minute of my Friday night in K.Town. I’m so grateful for being able to live so close to such a place. So you guys out there who has never been to K.Town before, I highly recommend you to stop by that place when you come to visit UCLA!