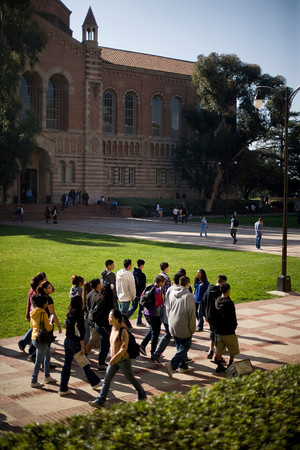 UCLA has tons of student clubs and organizations (close to 1000!), and many of these clubs have end-of-the-year parties. Perhaps the best e-o-t-y shindig is the ~banquet~. Not every club has one (for example, my Alumni Scholars Club, which regularly caters its events, doesn’t hold any fancy school’s-over foodie party for its members), but some (lucky) groups do.

There are a lot of different kinds of banquets. Some are subsidized by the club through fundraisers, some are paid for by attendees, some are casual, some are super duper swanky.

This year, I got to go to two, and both were awesome and fun despite being very different. Both were free and had a serve-yourself buffet style food arrangement, but the similarities end there.

One banquet was for Campus Tours and was held at an “Italian” restaurant in Westwood (and I put Italian in quotes because none of the food I had there was Italian (ie. I had a salad with iceberg lettuce and ranch dressing)). It was a grand ole time filled with goofy awards and sentimental speeches by the group’s graduating seniors. Dress was casual – I wore a Hawaiian shirt – and although there were a lot of tour guides, the group wasn’t nearly as large as the group in my second banquet, which took place in a huge restaurant/hotel/event center (I have no idea which one it really was). The second banquet was for the Daily Bruin, which, as a newspaper, has tons and tons of students involved. We had the dinner in this huge room with three chandeliers, a stage with a microphone, and a dance area with parquet flooring. The food was amazing (self-serve means a heap of cheese went onto my pesto pasta), and the evening was great. There were also awards at this one, although these were a tad more legit. The Daily Bruin won a Pacemaker award, which is like the Pulitzer of college journalism. The night ended with lots of dancing and even more singing (I think I lost my voice singing along with Adele (not the first time)).

Going to these banquets makes me love love love my on-campus groups even more and makes me a little jealous of the clubs my friends are in. I have a friend who went to Korean barbeque with her group and another who went to an Indian restaurant in Beverley Hills. Mostly I just love food, but hanging out with the people in your clubs is really what makes these things great.

Being in on-campus groups is already fantastic, but these end-of-the-year celebrations make being involved that much better.