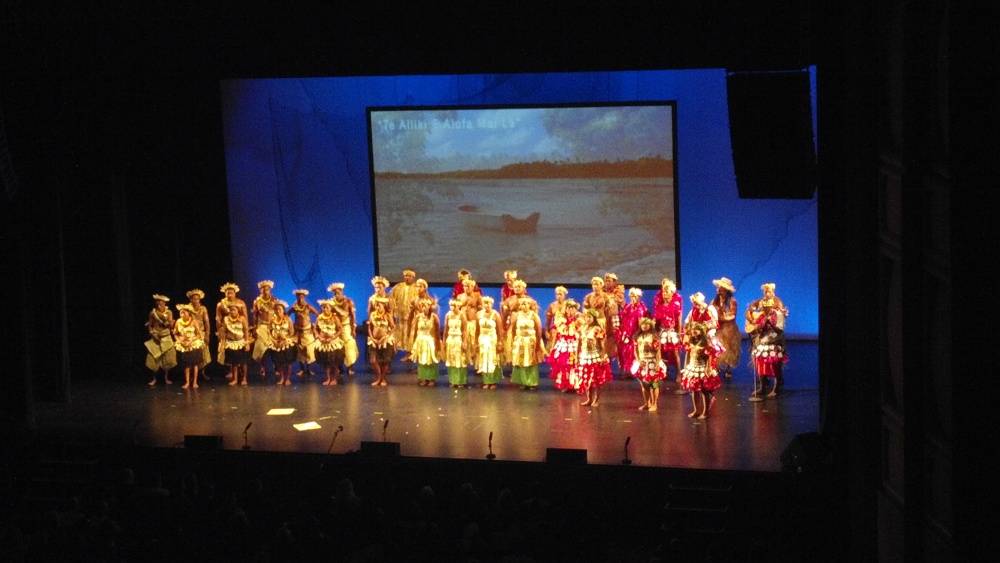 One of the best things about UCLA is UCLA Live!, hands down.  It brings all sorts of performances to our very own Royce Hall auditorium, one of the premier concert halls in the nation.  I have attended contemporary ballets, cultural programs, plays, and also performed onstage with the UCLA Choral Department for our quarterly galas.  This past Saturday, I paid another visit to my favorite building on campus, this time to see a performance titled “Water Is Rising”.

As a Geography/Environmental Studies major, I have sworn my life to the topic of climate change among others, but climate change is definitely one of the foremost concerns of those studying environmental history and change.  This production brought dancers from the Pacific islands of Tokelau, Tuvalu and Kiribati to share their culture and climate change concerns with Americans, through song and dance.  The performance consisted of a series of ethnic dances, each fraught with feeling and emotion.  The emotions differed each song; for instance, an I-Kiribati war chant was fierce with determination, while a Tokelauan ballad paid tribute to their sacred island.

Along with speeches by the Dalai Lama and standup comedy from Jason Segel, this was one of the less typical fine arts performances that have come to Royce.  Yet, it was an evening of cultural appreciation, and the combination of the colorful stage backdrop and ethnic dresses transported me from my seat on the balcony in the student section, to the stage, to the middle of the Pacific Ocean, where their people dwelled and are  feeling the most acute effects of climate change, magnified by relentlessly rising sea levels and the vulnerability of their quiet islands.