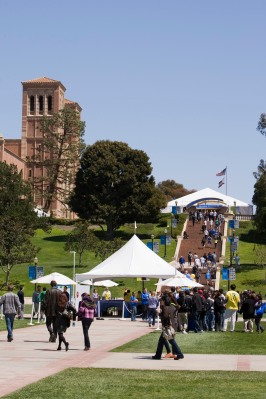 One sunny day half a year ago, I passed by a blank sign of the same motif as the four beautiful buildings in Royce quad, and didn’t think much of it.  The sign was blank and positioned slightly crooked, but I thought no more of it and continued on my way to class.  If I had known then what that sign was for and that I would see it again half a year later, I might have given it more thought or attention, or at least waited to find out why there sat a blank sign in the middle of Wilson Plaza.

Today, I saw the sign again, this time on television.  It was just a lazy Sunday afternoon surfing channels when the boyfriend suddenly called out, “Look, that’s UCLA!”, pointing at the TV.  Sure enough, it was the famous Janss Steps proudly representing UCLA in the midst of a “University of Farmers” insurance commercial.

Although at the top of the steps artificially stood (thanks to editing software) Kaufman Hall, the rolling hills next to Janss Steps and the sprawling plaza at its base confirmed that it was indeed our campus.  They must have needed an iconic university campus for a tongue-in-cheek advertisement about the “University” of Farmers, and chose to film at ours for the convenience of being right at the heart of film production and also for being such a pleasant place to film both in terms of aesthetics and the weather.

It had always been fun for me to go back and watch movies that I am told were filmed at UCLA, but today was my first time encountering a shot of UCLA without actively looking for it.  And to tell the truth, I was very proud.

*Farmers Insurance Group is not affiliated with, or endorsed by, the University of California Los Angeles.