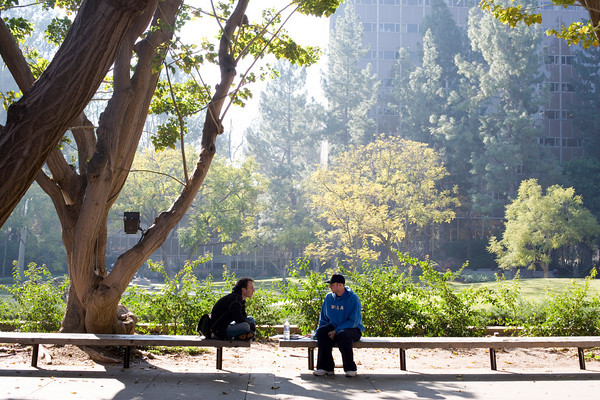 Around this time each year, I like to watch the movie the Holiday with Kate Winslet and Cameron Diaz (oh and like Jude Law and that Jack Black character, but I prefer these two fab  ladies). Thankfully, it has been on my mind lately (as in I have been reciting dialogue in my head). One conversation in particular between Kate and Jack is about the famous Santa Ana winds. Having never actually experienced these winds, I always kind of just stared at Kate Winslet during that part. But not anymore. I have experienced the Santa Anas.

It all started out like a normal day. Beautiful weather – a little cold – but nice. But pretty soon into the day, the sky seemed like it was yelling or least taking really big sighs. If you looked at the trees, they appeared to be doing a giant coordinated, although kind of erratic, dance.

By the evening, the winds had started going just plain crazy wild. At one point I was standing on the balcony of Royce and I felt like I was going to be swept up. Even thinking about it now makes me shiver! And the winds were loud. I had a meeting and at one point I couldn’t hear the speaker because the winds were that loud.

The wind even came into my dorm room. About every three minutes there would be a huge burst of wind and it rattle my reusable water bottles. It even messed with some of my ceiling tiles. I had to climb up on my chair and fix it!

Walking around the next day, the ground was completely littered with tree-related articles. There were leaves and pine needles, and even huge strips of bark that had been ripped from the tree trunks. There were even trees that fell down. A pretty big one near the inverted fountain took a tumble during the middle of the night (I wish I had been there to see that!).

But apparently, we did not even have it that bad compared to other areas of California. My friend who goes to school near Pasadena said that she could not sleep because of how loud the wind was, not to mention that it wasn’t just leaves on the ground the next day but lots of whole trees.

The Sanata Anas are crazy, and even though they are a tad inconvenient, they are a ton of fun. Hopefully we will have more of them, just not too big!